High atop a hill overlooking the Connecticut River in Hadlyme CT, across the sound from Long Island’s East End, is a wonderful connection to our upcoming boots on the ground theater production of “Sherlock’s Secret Life.” This stone fortress that looks like a medieval castle was once the home of William Hooker Gillette, noted actor, director, and playwright, best known for his portrayal of Sherlock Holmes. Although not the first to take on the Holmes role he was the first actor to bring Sherlock Holmes to the stage officially, as authorized by Arthur Conan Doyle himself. To this day he’s considered to be the ORIGINAL Holmes.

Gillette built his one hundred twenty two acre estate, known as the Seventh Sister, on a hill in a chain called the Seven Sisters. The twenty four room mansion, completed in 1919, was Gillette’s home during the last years of his life and reflects his eccentric genius both outside and in. The house and grounds were purchased by the State of Connecticut in 1943 as a public park open to visitors each year.

I’ve seen this fortress from afar and have always wanted to visit. In the meantime I thought it might be fun to connect with some of the folks who work at Gillette Castle and dive into a bit of the history of Gillette, Conan Doyle, Holmes, and the Long Island connection.

Who was William Gillette?
William Gillette was widely considered to be the Dean of the American Theater and was one of the most famous, successful and influential actors in the US and Europe around the turn of the 20th century. Gillette was born in Hartford in 1853. His father was prominent in Connecticut politics and served in the US Senate in the mid 1850’s. His mother, Elizabeth, was a direct descendant of the Reverend Thomas Hooker, one of the first settlers of Hartford. William was an actor, director and playwright whose works were produced worldwide. He’s best known for writing and starring in the first authorized play adaptation of the Sherlock Holmes stories. 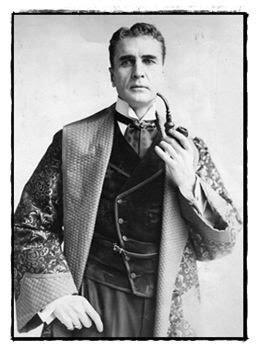 How did he come to build his Castle… and is it a real Castle?
The legend is that Gillette was cruising the Connecticut River on his houseboat in 1913, saw the property and fell in love with it. In reality, Gillette started buying up land for the estate as early as 1908. It is not known what drew him to Hadlyme. He’d traveled Europe and we know from his scrapbooks that he admired the medieval castles he saw along the Rhine River. Although these old fortresses were his inspiration, Gillette never called his house a “castle.” He preferred using its proper name: the “7th Sister Estate”, named after the hill it was built on. 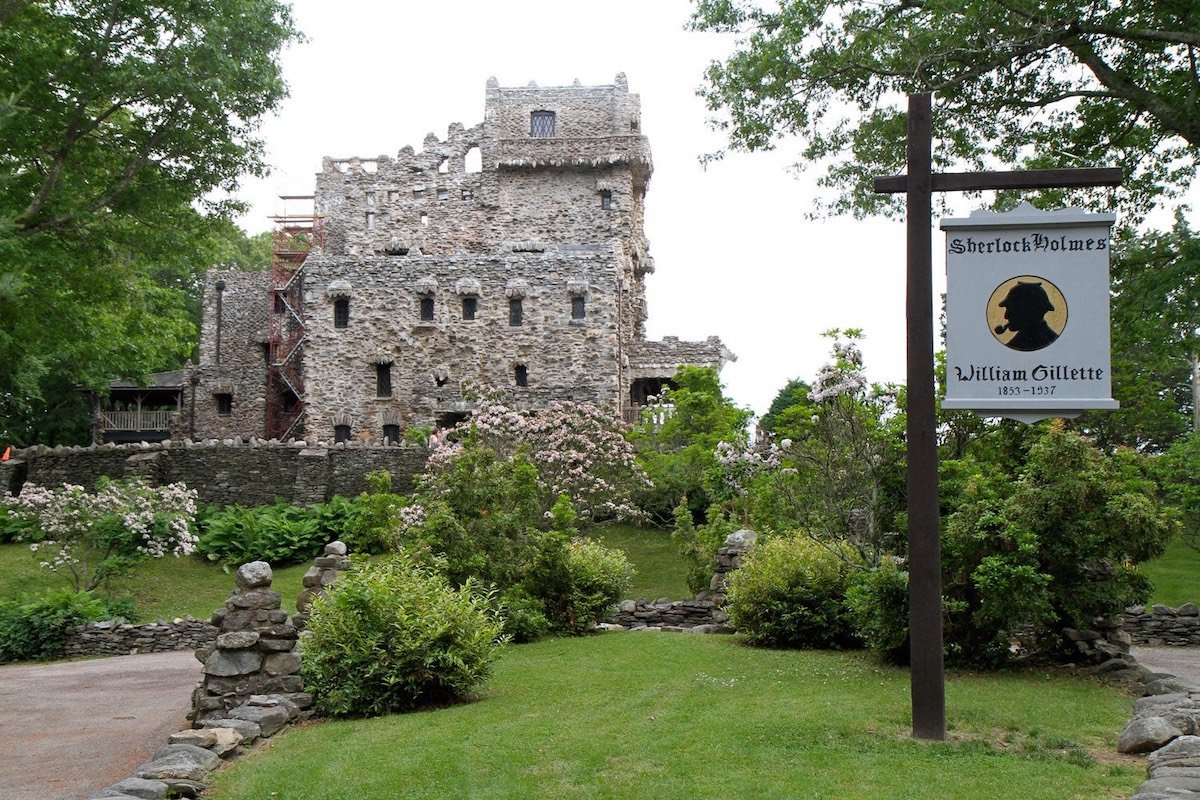 He was one of the first to portray Sherlock Holmes. Tell us about his history with Sherlock and Arthur Conan Doyle.
In the mid 1890’s, Sir Arthur Conan Doyle decided to explore a stage adaptation of his Sherlock Holmes stories. After a number of missteps with various writers and actors, Doyle’s agent finally reached out to Charles Frohman, William Gillette’s agent, and Gillette signed on to adapt and star in the new play. The writing process began in 1898. Doyle and Gillette kept in touch through wired messages until May 1899 when Gillette visited Doyle at his estate in Surrey England for final approval. The legend is that when Gillette stepped off the train, he approached Doyle with a magnifying glass and said, “I do believe I see an author!”. The comment elicited a laugh from Doyle and established a friendship and business relationship that lasted until Doyle’s death in 1930. Gillette died 7 years later.

Is it true he coined the phrase “Elementary my dear Watson”  and was the first to wear the now classic Holmes hat and cape….?
A deerstalker hat was never really referenced in the stories. However, Sidney Paget, the illustrator, drew a deerstalker for Holmes, and Gillette is credited with popularizing it. He made some other significant Holmesian changes. In the novels, Holmes had a straight pipe. Gillette chose a curved pipe since it was easier to hold onstage and better visually for audiences. Likewise, Holmes used a pocket lens but Gillette enlarged it it to a magnifying glass so audiences could see it from the stage. The phrase “Elementary my dear Watson” was never in the stories. Gillette originated the phrase “Elementary my dear fellow” which evolved over time.

More than any of that… Gillette was the living personification of Holmes. People who saw his shows considered Gillette the real Holmes. Orson Welles once said, “It’s too little to say that William Gillette resembles Sherlock Holmes; Sherlock Holmes looks exactly like William Gillette.” Until recently any classic actor who came after Gillette tried to fit his profile. 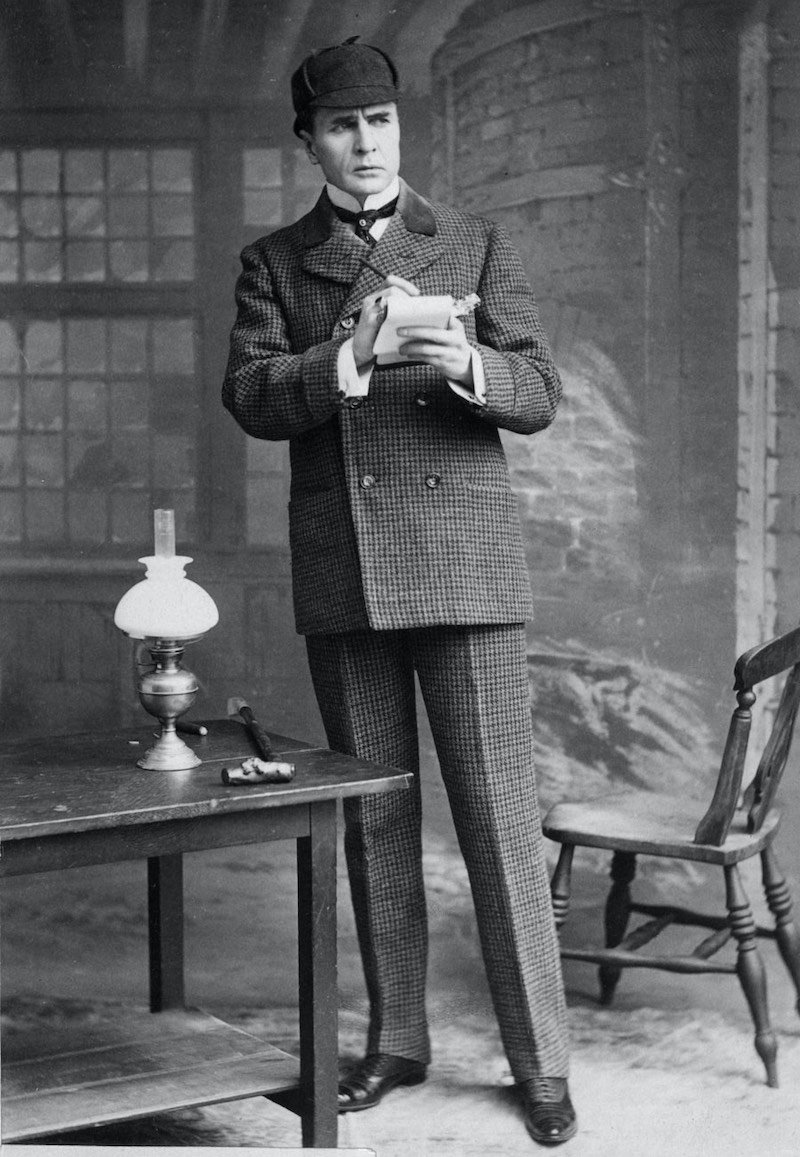 What was his connection to Long Island?
William Gillette spent a great deal of time on Long Island. His houseboat “Aunt Polly” was remodeled and based out of Greenport where he spent many summers. The marine mosaic glass on the boat was commissioned by Gillette from Walter Cole Brigham of Shelter Island. Gillette originally bought land in East Marion on Long Island’s North Fork for his retirement home. He was supposedly a popular fixture in the town. Eventually he opted to build on the Connecticut River and sold the land on Peconic Bay.

Why is William Gillette important?
William Gillette was a trailblazer in American theater. He helped transform theater from the old melodramatic acting style to one that was more subtle and realistic. In addition to his world famous portrayals of Sherlock Holmes—1500 performances from the 1890s to the 1930s—Gillette also wrote, directed and starred in many original plays and adaptations. He was an innovator in stage techniques and engineering. He coined the term “Illusion of the First Time” – a preferred acting method where an actor performs in a way that the audience thinks it’s the first time the actor uttered those words rather than sounding rehearsed.

He had 4 patents to his name, from lighting to sound effects. He popularized something taken for granted in theater today – the “fade-out” or “fade-to-black” of the lights between scenes. Gillette was a matinee idol of his time and an international celebrity. He also mentored some of the finest actors of the time – including Charlie Chaplin and Helen Hayes. 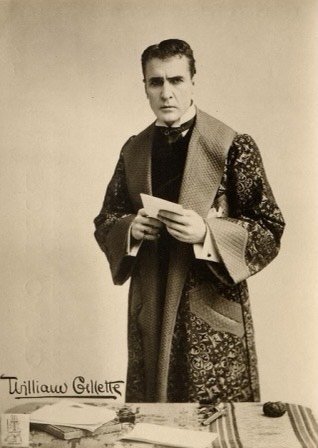 Many thanks to our contributors:

Here are some links to Gillette Castle and William Gillette’s history: