Broadway World is accepting nominations for their regional Long Island theatre awards. Click here to vote for us!

Spotlight on the Cast & Crew of Sherlock’s Secret Life 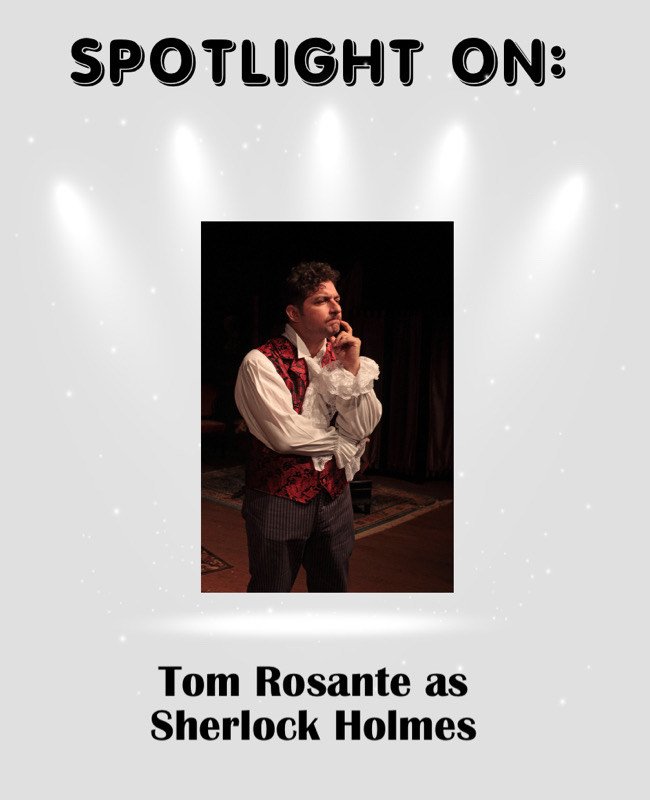 Tom is well known to SCC audiences having performed in many Center Stage productions including “Mamma Mia” and as Gaston in “Beauty & the Beast”. This is Tom’s first boots on the ground theater show playing the title role of Sherlock Holmes, the legendary detective. Tom embodies Holmes with a perfect combination of tradition and showmanship, wit… and allure. We’re thrilled to welcome Tom back in his brilliant recreation of the world’s most famous detective! 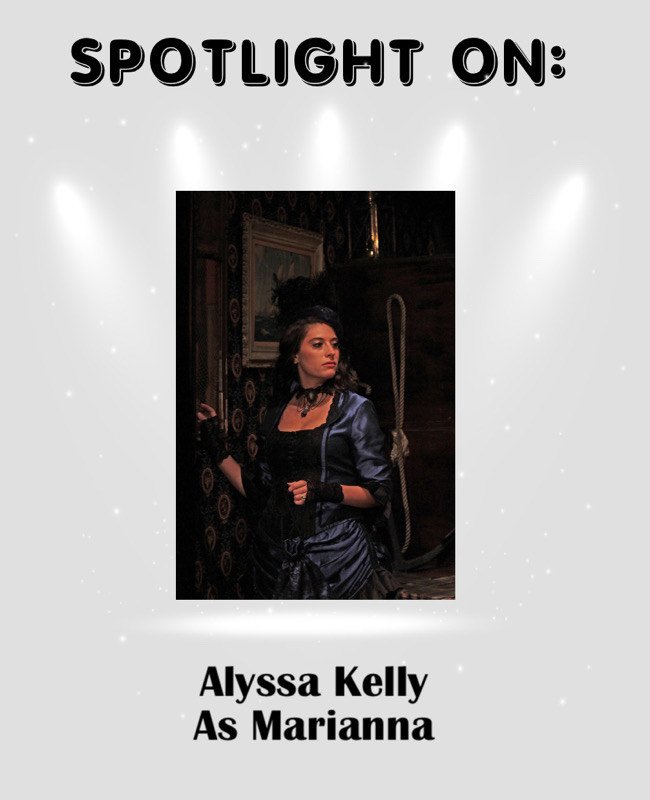 Alyssa reprises her role as the young Marianna who arrives at Sherlock’s door with no memory of who she is or where she’s from. Thus begins a thrilling journey for Holmes & Watson and one that will change them both forever. Who is this young and beautiful Miss Smith? Is she telling the truth? Is she a spy? And how is Professor Moriarty involved? This is Alyssa’s first dramatic role after performing in numerous musicals across Long Island. She’s beautiful and brilliant and we’re thrilled to have her as part of our wonderful cast! (Along with her newborn who spends much quality time with us at rehearsals 😊.) 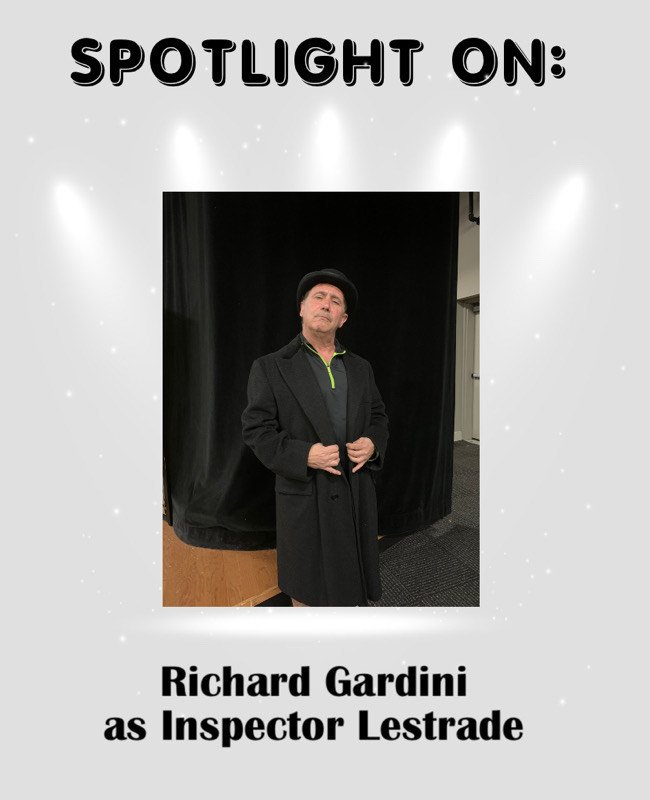 Rich is well known to audiences across the East End. He’s been in so many shows we’ve lost count! But we’re super excited that he’s back with us this year as Inspector Lestrade, Sherlock’s crime solving compatriot from Scotland Yard. Rich brings Lestrade to life as only Rich can: a perfect blend of curiosity, humor and street smarts. Lestrade’s grit is an ideal foil for Sherlock’s more intellectual style. And there’s nobody better than Rich when it comes to comedy. Don’t miss his unique take on the Inspector. 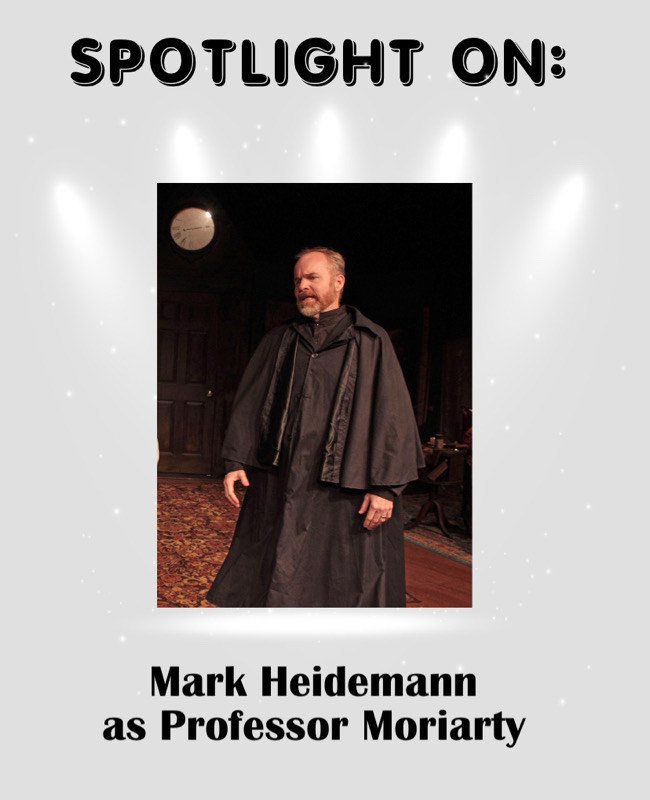 The name Moriarty is infamous in the world of Holmes and beyond. He’s also synonymous with evil and a cunning intelligence that rivals Holmes himself. No surprise since the Professor was Sherlock’s teacher back in the day. Mark Heidemann joins our cast and “boots on the ground theater” for the first time with this meaty role. And man does he deliver! He chews up the scenery and script with such power and poise you’ll find it hard to believe he isn’t Moriarty. We welcome Mark in this role and his other debut next year: Mark will direct our next botgt production in October 2022 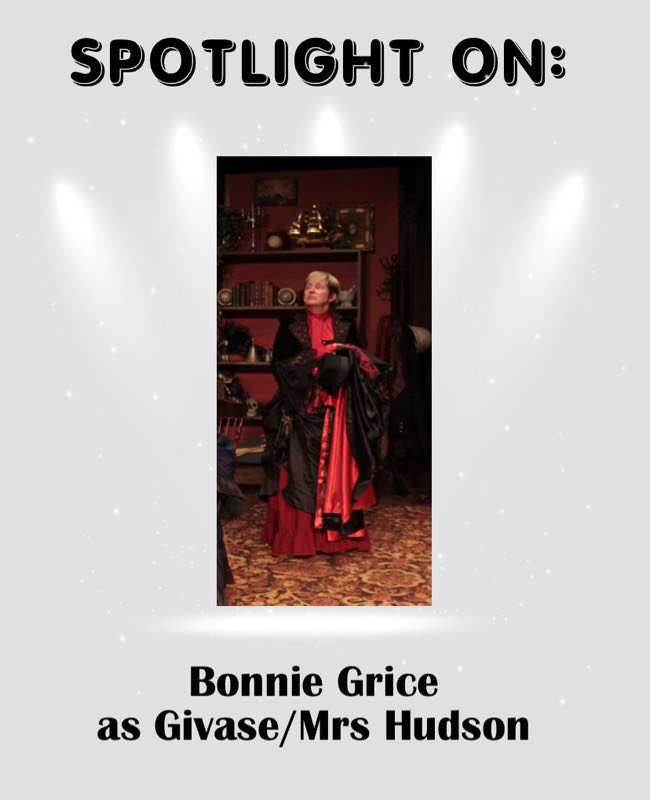 Bonnie is featured in the role of Mrs Hudson aka Givase, Sherlock’s landlady and helpmeet when it comes to solving crime. She’s often thought of as nothing more than a “twit” but don’t be fooled. She appears to be a bit flighty in her own motherly way, but her instincts rival Holmes. This is one of many roles Bonnie has done over the past decade here on the East End, from Shakespeare to Steinbeck. In addition she’s spent the last 3 decades in radio working at stations across the country. Bonnie is also our botgt founder and artistic director. She started her company 5 years ago to bring history to life onstage and on site, through a variety of re-enactments and Mainstage shows. This marks her third Mainstage production at the SCC where boots on the ground theater is now a Company in Residence. 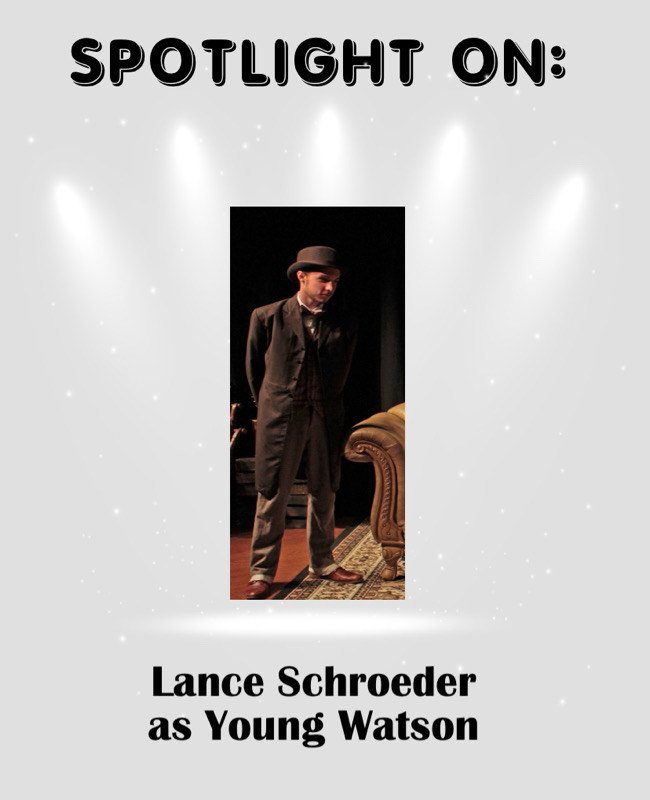 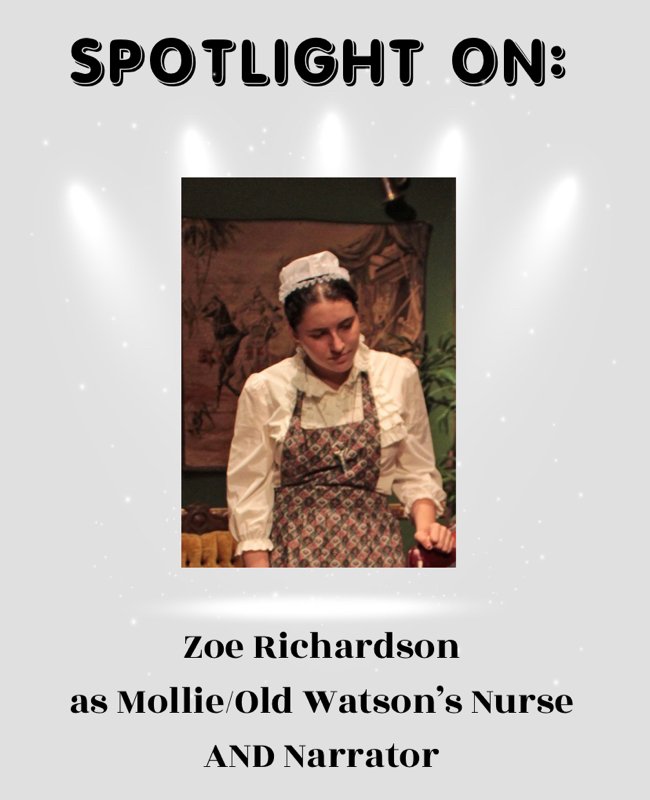 Meet two of our newest (and youngest) cast mates who are both classmates at Pierson High School in Sag Harbor. Lance is a Sophomore and has already walked the boards in a variety of student shows. As has Zoe, a Junior at Pierson, who was awarded a number of Teeny Awards this year. Lance takes on the role of a young Dr. John Watson, whose friendship with Holmes is threatened by the arrival of a mystery woman. Zoe plays Mollie, older Watson’s feisty yet steadfast nurse. They’re both naturals on stage and are a delight to work with. They’re also part of the botgt mission: to feature at least one student actor/apprentice alongside our Long Island stage veterans. Please come watch them in action and cheer them on! 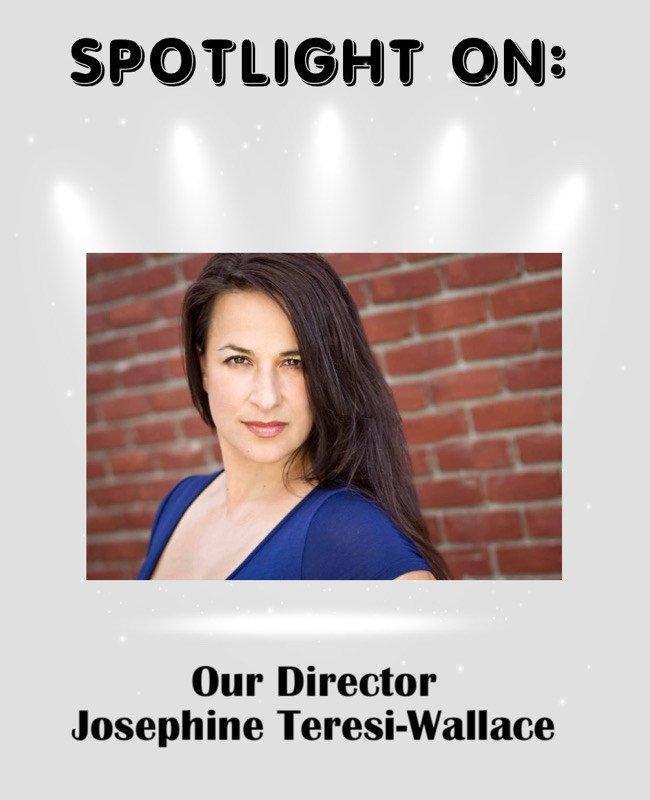 Josephine is not just a triple threat in theater —she’s a quadruple threat. She can act, dance, sing… and direct! We’re thrilled she made her directing debut with boots on the ground theater in 2018 with the stage version of “The Red Badge of Courage” — a New York premiere. And now she’s back directing the Long Island premiere of “Sherlock’s Secret Life”. This is actually her third go-round, since we opened last March and closed after 3 performances due to Covid. So we’re back and Jo’s back…. using her years of experience as a performer and her remarkable creative energy to help guide our cast and crew. Don’t miss this show! 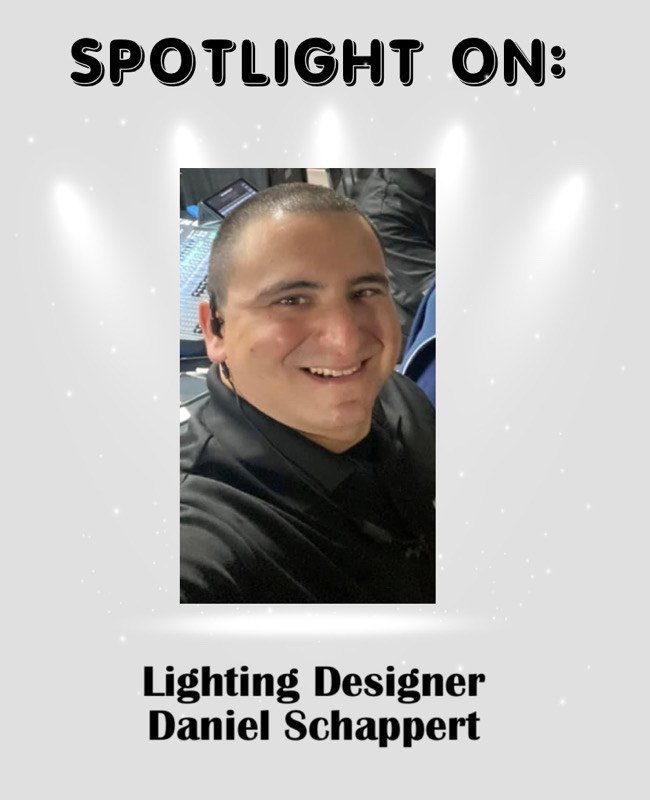 Dan has done lighting design for countless shows across Long Island and NYC. “Sherlock’s Secret Life” marks his third boots on the ground theater production and we’re excited to welcome him and his expertise back to the boards (and the rigging!). In addition to his lighting designs Dan is also a full time EMT and dispatcher. And is the TD for the Southampton Cultural Center. 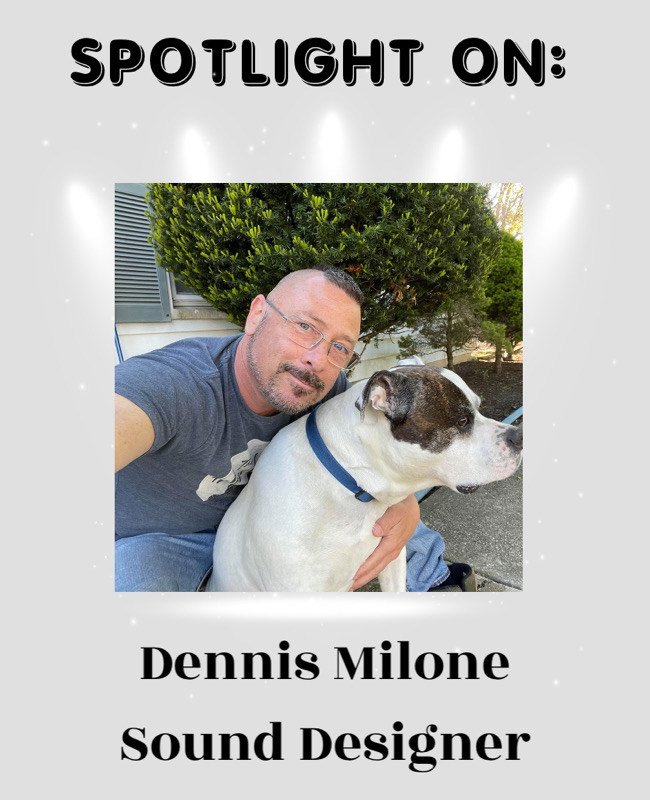 Dennis has worked on shows all across Long Island, designing sound and music for a wide range of performances. “Sherlock’s Secret Life” marks his third boots on the ground theater production. And we look forward to more! In addition Dennis is a musician and composer, currently working on his next EP release. His jingles have been heard on local radio. And he’s proud Papa of Diesel aka “Boo Boo” our wonderful colleague and mascot.